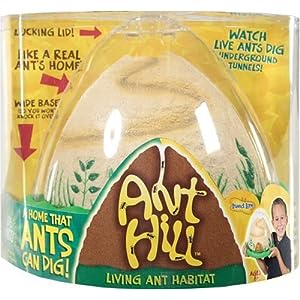 With two boys, it’s pretty much par for the course that anything creepy, crawly or small and bug like is a hit in our house.

So needless to say, since my kids love looking at ants outside, they were more than thrilled to have ants inside of the house via our new Ant Hill from Insect Lore.

The kit arrived separately from the ants.  I put the kit away until the ants came in the mail, and then unveiled everything.

I know a lot of bloggers were skeeved out by the ants.  While I am definitely a girly girl when it comes to spiders, ants don’t seem to phase me so this didn’t bother me so much. That said, I think hubby was as excited as the kids to put this together so my three boys sat down to put everything together.

They put the ants in and we set the habitat on our counter.  Over the course of several days, it was cool to see the ants go to work, making little pathways for themselves here and there. At one point a couple of ants were trapped in a little spot that was “caved in.”  My kids were very concerned but the next morning they had somehow dug out and all was right in our Ant Habitat again.

The Insect Lore Ant Hill retails for $19.99. It’s currently on sale at Amazon for $15.12 and you can still get it in time for Christmas!

Here are some photos of hubby and my boys putting this together the night the ants arrived:

And one week later, this is how our ants have changed their habitat to suit their needs:

It’s been really fun to watch.  Even I’ve gotten into it – I like coming down each morning to see what new tunnel they’ve dug overnight.  And the kids haven’t lost their enthusiasm for this as they do with so many other things – time will tell but I think this one is definitely a keeper.

Giveaway: Additionally, I have a fun giveaway to go along with this post.  You can enter to win two sets of the Ant Hill – one for yourself and one for your child’s teacher for the classroom!   Comment to enter below.

One winner will be selected at random after December 22nd. Extra Entries:  Tweet about this giveaway.  Suggested tweet:  I just entered to win 2 @insectlore Ant Hills from @mommieswstyle

I’m a part of a campaign with Insect Lore.  Last month I reviewed their Buzzerks glasses.  I also reviewed their Butterfly Garden back in July when I wasn’t a part of this campaign but had won a kit at a local event just thought this was a really cool product.