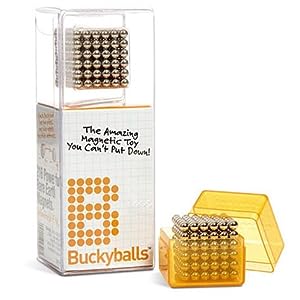 Purchased on a whim because he saw them in-store and proclaimed he wanted some: Bucky Balls!  We first saw these in Brookstone in the Philadelphia Airport and Nate was insistant that he wanted some for Christmas.  Proclaimed he was adding it to his list for Santa and reminded me regularly about it from there on out.

I must admit, I was skeptical and wasn’t intending on getting these for him.  But he persisted, so much so that I ordered them a week before Christmas.

Not only are they his favorite Christmas gift, they are mine too!  The entire family has been fighting to play with these addicting magnetic balls.

They’re not cheap ($29.95 with free shipping on Amazon) and they actually have a warning on them that they are not intended for children.  I’m going to assume it’s because these are very small magnetic balls that would be pretty dangerous if swallowed.

So I’d say these are not for a house with a baby or toddler but if your kids are older and you are confident they won’t go eating these little balls, check out Bucky Balls.

The tagline describes it best – “the amazing magnetic toy that you can’t put down.”  You really can’t – it’s like Silly Putty only better.  Millions of possibilities.  I want some for myself.  Wish I had a set when I worked in corporate – I can see playing around with these for hours.  (Making this an awesome gift for Dads or travelers too!)

2 thoughts on “Who Could Have Guessed: My 7 Year Old Boy’s Favorite Christmas Present”